Is This The Secret To Limitless Energy And Vitality

Published on August 2, 2016 by Sharron Manson

The Journal of Natural Health Solutions

Is This The Secret To Limitless Energy And Vitality

Regular exercise, alongside a healthy diet, is the key to good health, right?

In fact, you may even have been told by your doctor at a recent health check that you need to incorporate more exercise into our life. While there’s no denying that this is sound advice, it’s important to be aware that exercise can put a strain on your body and deplete it of its reserves of vital nucleotides. So, if you’re exercising regularly your body may require a little help. That’s where a new supplement  called nnnSPORT®X-Cell comes in. It can benefit everyone, from athletes looking to push their bodies to the very limits… to those of us looking to increase our fitness levels and improve our health through slightly less gruelling and punishing exercise regimes.

As well as containing vital nucleotides sourced from yeast, nnnSPORT®X-Cell also includes the amino acid L-lysine plus vitamins C, B5, B7, B9, B12 and E. This impressive line-up of ingredients is designed to improve your exercise performance and recovery afterwards, boost energy levels, aid digestion and help keep your immune system firing on all cylinders. 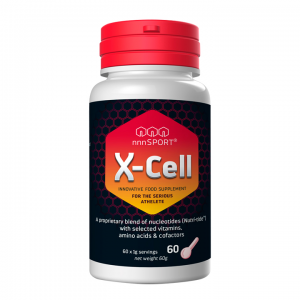 Nucleotides form the basic building blocks of the nucleic acids, or information-containing molecules, DNA and RNA. While that may sound a little complex for those of us who don’t hold a science degree, the bottom line is that nucleotides are the key to cellular regeneration, which is crucial for keeping us healthy and active.  Some kinds of body cells and tissues have higher requirements for nucleotides – including white blood cells (an important component of the immune system), the cells lining the small intestine that are involved in digestion, and red blood cells that are needed to oxygenate the blood and for energy – due to their rapid turnover rate of new cells.  These kinds of cells rely on a steady supply of nucleotides from the diet, since unlike other cells they may be unable to obtain sufficient amounts from the manufacture of new nucleotides in the body or from their release when DNA is broken down.

Many scientists now believe that dietary nucleotides are ‘conditionally essential’ and, for many people, should be regarded in almost the same way as vitamins and minerals, as being necessary for good health1.  Unfortunately, though, the modern Western diet is woefully lacking in these vital compounds. Rich sources of nucleotides like organ meats (liver, kidneys, tongue, brains, etc.), which used to be eaten regularly in times gone by, have fallen out of favour these days. In addition, our diet has become far less varied than that of our ancestors, which means that most of the foods we eat today have only a limited nucleotide content2.

Fortunately, nnnSPORT®X-Cell could now solve this problem, in addition to helping your body adapt to the to the demands placed on it resulting from exercise. For starters, upping your levels of nucleotides benefits your red blood cells, which transport oxygen through your body including your muscles. The muscles are then able to benefit from this readily available source of energy, particularly during exercise. It also results in less lactate (a side effect of muscles struggling to function aerobically) being produced, which results in shorter recovery times after exercise and reduces the likelihood of muscle cramps.

Effective digestion and absorption of nutrients from the gut are also vital to  recovery and regeneration. Trials have shown that nucleotides improve overall gut health, the diversity of the gut flora, and the length of the villi (the greater the length of these tiny finger-like projections from the lining of the gut, the greater its surface area and ability to absorb nutrients). The gut cells are also key protective components of the immune system.

Supplementing with nucleotides has been found to have a significant impact on the immune response and recovery of athletes performing both ‘high intensive’ and ‘moderate endurance’ exercises. Levels of immunoglobulins and lymphocytes (indicators of immune system activity) were found to be higher after supplementing with nucleotides; and cortisol levels were reduced3,4,5. High levels of the stress hormone cortisol can compromise immunity6.

Cortisol levels at 15 and 30 minutes post-exercise were significantly lower in the nucleotide group compared to the placebo group. That’s not all… up until 60 minutes post-exercise cortisol levels in the nucleotide-supplemented athletes remained stable, whereas a significant increase could be observed in the placebo group’s levels.

The most important outcome of this study, according to Dr. Peter Koeppel, the scientific brains behind nnnSPORT®X-Cell, was that isometric muscle tests showed that the strength of the athletes taking nucleotide supplements did not change after strenuous exercise; whereas when they were taking the placebo their strength was significantly reduced and they required 48 hours for full for full recovery.

In the same trial, the creatine kinase values (an indicator of muscle damage) were also significantly lower in the athletes when they took nucleotides, compared to the placebo.

Commenting on the study, Dr. Koeppel said: “The results were quite striking… It can be concluded that nucleotide supplementation lowers the stress response, reduces muscle damage and preserves force production capabilities after intensive exercise, plus it improves the recovery from strenuous exercise.”

What to take for best results

The recommended dose is two level scoops (1g each) of nnnSPORT®X-Cell powder each day diluted in water or a cold drink. An additional one or two level scoops can be taken before, during or after periods of strenuous exercise.

Contraindications: You should consult your doctor before taking nnnSPORT®X-Cell, particularly if you are on any medication. This supplement should not be taken by those who have had an organ transplant or are taking immuno-suppressant medication.

Urgent information: Prescription drugs have long been seen as the answer to treating chronic illnesses like heart disease, diabetes and dementia. But this recent report shows that modern medicine might not have all the answers after all…

8. Journal of Strength and Conditioning Research 2015